Usually once every winter, I have this wish. Sometimes, in an especially trying winter, I might have the wish a couple of times. I’m having this wish now. 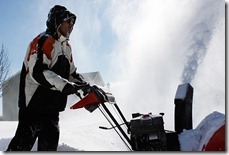 The wish comes about a third of the way through shoveling out after a big snow dump. LIke today. I measured the driveway before I got Big Bertha down to business (the shovel, not the golf driver) and the tape buried itself into nine inches of snow. For you younger whippersnappers, that’s 22.5 centimetres. Nine inches of heavy, wet snow in less than nine hours. And it’s still coming down. When there’s this much snow to shovel, you don’t think of all your sidewalks and driveway as area to be cleared, you think of it all in terms of pounds-of-snow-to-shovel. At a third of the way through completion, I looked around at all that whiteness and calculated that I had about 17 million pounds of snow to go. Or about the combined weight of every Democrat blogger that’s penned the original phrase "Mitt the Twit" in recent days.

So I wish I had a snow blower.

My brother has one. He just moved here from yonder west of the Big Pointy Hills; from the lower mainland of BC. Yeah, the place where they don’t get any snow – just rain, rain, rain and dank clouds that droop just north of your sinuses. That soggy place alongside the Chilliwack to Vancouver wagon trail where even a weathercast warning of snow has drivers veering off the roads into ditches and medians just out of principle and practice. But now L’il Bro is here in Sunny Alberta and he bought himself a snow blower. Bought a snow blower before he even bought furniture for his new house. "Priorities!" he said. "Wussy," I replied silently.

And then I laughed. Oh my, how I had laughed!

But not so much anymore. While my 50-year old back is screaming "No mas!", I can hear my brother from miles away singing over his big yellow Poulan: "Let it snow, let it snow, let it snow!" I can’t believe any self-respecting snow blower dealer would even sell a machine to a transplanted Wetlander like him. It’s a fright what Alberta is coming to. First we drop the border guards and let the rats in willy-nilly from Saskatchewan and now we’re becoming a winter wonderland for snow-blower-pushin’, NDP-votin’, umbrella-ownin’ Wetlanders. Graciousness!

But regardless,  i wish I had a snow blower. Maybe I’ll steal his. Put a shovel with a pull cord in its place. He’d never know.

Or maybe the Bos Lady will buy me one. Maybe. Depends how many pairs of new shoes she needs this week. If it’s less than a dozen for Bos Lady Imelda, I’ve got a chance!

Wish me well. ‘Cause I need a snow blower. 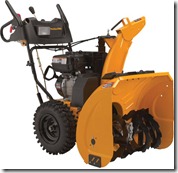 Executive Director of a non-profit organization in Alberta that supports adults with developmental disabilities. Love to golf, curl, and write. Married to the Bos Lady for 34 years. We have one daughter and a son-in-law, two sons, a daughter-in-law, three granddaughters, and two grandsons. View all posts by BosMan31