It was about four years ago that the couple (fondly called “The M&M’s” or “M&M” by their friends) first spoke out loud to each other about the strangeness of Busby, but if one had asked either of them if they had thought about it before that initial conversation, each would have said: Of course! And both can recall that initial conversation pretty much verbatim.

“Ever notice…”, Mike began before tailing off, as he slowed to 50 clicks entering Busby. “Ever notice,” he began again, “Anything strange or wrong about this little hick town?”

“There seems to be something not quite right about it,” replied Monica. “That’s for sure.”

Mike nodded, while reading the rent-a-sign on the fire hall property as they drove by, a note to area farmers: Don’t forget, controlled burns required fire permits! Call Alberta Lands and Farms. That’s new, Mike noted mentally; last week when they drove through Busby, the sign had offered a more generic message: We love our kids – give then a brake!

“There are no people,” Mike offered. “We never see any people when we drive through.”

“I’ve been seeing that, too” Monica responded. “Or not seeing them, if you will.”

“No dogs or cats either.”

“And no sounds. Ever notice we never hear a lawnmower? Never a weed whacker?”

“I hadn’t, actually. But now that you mention it, you’re right. Nothing like that at all.”

“Except that time you thought you were wrong, but you were mistaken.”

And they both chuckled. It was an old line between Mike and Monica VanHoven, one of those never-get-old, warmly shared jokes that long-term couples cherish between themselves, in spite of the rolled-eyes of friends and family who have heard it again and again over the years.

That conversation, fresh as it remained in their minds, was four years ago. Today, as they crawled through Busby, nothing had changed. In the almost-weekly drives through Busby en route to their lake cabin, Mike and Monica had never seen or come across any creature. No man, no woman, no kids on bikes getting Slushees from the general store, no baby crying from a bedroom crib in the summer’s heat, no dog barking, no cat in heat desperately wailing.

And it wasn’t like they hadn’t taken the time to investigate, to have a closer look to dampen their curiosity. They had, beginning two summers ago; a time that marked the pending darkness of the nightmare that would change their lives.

The VanHoven’s black Ford pickup slowed below the town’s speed limit and Mike turned on the left turning blinker. It was almost 11 o’clock on a beautiful, sunny Alberta morning. The kind of day that promised 30 degrees or better, not a whisper of wind, and a forever sky of endless deep blue. The kind of day many Albertans would snap-capture on iPhones and Samsungs, texting blue skies to family and friends on the Wet Coast suffering from another endless week of soggy, gloomy drizzle and low cloud. Don’t you wish you were here in sunny Wild Rose Country? was the kind of needling caption that generally accompanied these photos.

“What are you doing?” asked Monica, as the truck begin making the slow left-hand turn onto a Busby avenue.

“Gonna have a look-see,” Mike replied. In the miles of highway leading up to Busby, Mike had been more quiet than usual behind the wheel. He’d been thinking about Busby and its inherent wrongness, and – logical thinker that he was – concluded there was only one way to begin to figure out Busby, and that was to drive through its streets. A reconnaissance mission of sorts. We’re gonna buzz through Busby!, he’d decided. Get a close-up gander to see if Busby was what it appeared to be. Or not.

Monica did not respond at first. Like Mike, her curiosity about Busby had been growing every month, but despite her need for answers, or at least a better understanding of this odd little town, she felt her stomach perform a little somersault as the truck began turning off the highway, a fresh splash of adrenaline heightening her senses.

“You sure this is a good idea?” she asked in voice that was more timid than she intended. She scolded herself mentally and then suggested in a forced jovial tone, “Beware yon boogiemen who tarry in the wings of this wee little burgh!”

Mike laughed, not so much at the line itself but in its delivery – a mix of olde English delivered in Monica’s Texas drawl schtick.

“Well, if we see boogiemen at least we’ll see something moving in this place,” Mike answered.

And so they drove slowly and quietly up and down the blacktops of Busby. Like most small towns, zoning bylaws were lax or non-existent with mobile homes permanently cast on cinder blocks next to modest bungalows and bi-levels next to Quonset huts offering feed and tack and small engine sales and service. 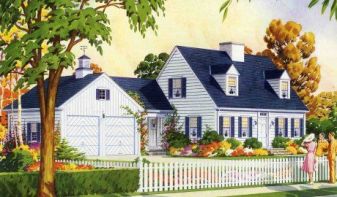 They saw property after property with immaculately kept lawns, perfectly and uniformly mowed as if all have been manicured just yesterday; not a blade out of place nor a sidewalk upswept. They noticed beautiful, thriving flowers planted in large attractive pots placed on concrete front steps, and colourful flower beds running alongside front walks. The took note of children’s bikes and trikes and toys neatly stored against houses, out of harm’s way but easily accessible for the next great adventure. They saw brand new and late-model trucks, cars and family vans, each purposefully backed onto driveways. They saw wind chimes (although these were silent on this windless morning) and army-straight fences and glimpses of well-tended vegetable gardens.

Mike and Monica took all this in without a word to each other, idling slowly up and down the streets of Busby. What both of them didn’t see, however, was causing them a growing and gnawing sense of unease. They didn’t see any home with a forgotten old car wheel-less on blocks, and no oil stains blemishing any driveway. They noticed no peeling paint on any home’s siding or trim, nor did they see any garbage in the culverted ditches, or cigarette butts and discarded empty packs in front of the restored old hotel bar. And perhaps more strangely, they noticed no window in any home or business without closed curtains or drawn drapes.

And of course, they didn’t see any living creature.

“I’ve seen enough, babe,” whispered Monica. “This place is giving me the heebie-jeebies.”

“I’m so with you,” Mike answered. “Let’s blow this town,” he joked nervously.

So the VanHoven’s turned back onto Secondary Highway 651 to quickly put some distance between them and Busby, crossing the railway tracks at the edge of town with too much speed, jarring themselves and the truck with a chassis-ratting thud.

Half an hour later, they drove through the gates of Lake Sundance Park where their cabin boasted private waterfront convenience. By this time, their unease and discomfort had subsided, falling to forgotten while the day’s temperature began its aggressive climb toward sunscreen levels. Busby-Schmusby, it was going to be a great day, they might have thought.

And it was a great day! The mercury cracked the 30-degree mark, and the heat kept the mosquitoes to buzz miserably in the shade. Mike and Monica enjoyed a spin around the lake in their new speedboat with Mike gunning it a few times to reach speeds that elicited non-stop giggling in Monica, a beautiful mix of thrill and worry. Later in the day, Mike climbed aboard the lawn tractor to mow the acre of grass, and Monica puttered in the cabin, preparing the salads for the suppertime steak fest. The kids were all coming up for a visit along with the grandkids, and the evening promised a wonderful mix of family, steak, watermelon and wine. Yes, a great day indeed.

Little did Mike and Monica know that this would be one of the last good days they would enjoy at their summer paradise.

A month later, they would find life after all in Busby. His name was Hans, the keeper of the general store.

Hans was not right though, not right at all. Hans was wrong in so many ways…

In nearby Dunstable, children fill the outdoor countryside with their usual frenzy of noontime motion and cacophony. The shouts, screams and giggles of these 60 elementary students rise into the big sky of Alberta with no witnesses, save those teachers whose charge they are; nobody else hears their play sounds. There is no town or village called Dunstable, as one might presume. No, the Dunstable School serves the farming communities around them, and the old school with the bright red trim sits hunkered down in the middle of nowhere.

Perhaps some of these children arrive from the hamlet of Busby, about 15 minutes east 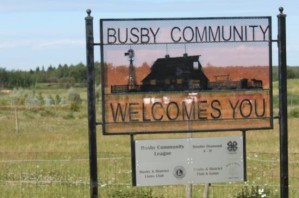 up Highway 651. It is a logical assumption one could make. But the couple in the late-model Ford F150 who are now approaching Busby from the other side of town no longer make this connection. The couple, long married in this age of disposable vows and gluttony for wows, are in their 50’s (she just hitting the milestone a few months ago, and he a qualifier for the Freedom 55 program) and have seen a lot in their lifetimes.

The most recent census shows Busby to be the sleepy hamlet home of 140 residents, and it is no different from thousands of these hiccups dotting secondary highways and narrow blacktops across Canada. It has a general store with assorted signs and posters on the window and door: FIREWORKS!! LOTTO TIX! FRESH BAIT! There is a Canada Post outlet, which is but a simple walk-in next to the store, filled with uniform rows of stainless steel mailboxes. And while some hamlets might boast a gas station as well, Busby does not – although it has a volunteer fire station (of sorts) and a solid brick community hall with no windows. The hall sits near the train tracks that cross the highway and mark the edge of town and the resumption of highway speeds and blurred dotted lines. Busby. Just like thousands of other forgettable places: “Don’t blink or you’ll miss it.”

The couple in the red Ford pickup never blink when passing through Busby. Haven’t for a long time. You see, there is something is wrong in Busby. The couple (as couples married for three decades or more are wont to do) have recurring little arguments about this: Mr. Freedom 55 takes the position that there is indeed something wrong in Busby. Mrs. Stuck-on-43 steadfastly asserts that there is indeed something not right in Busby. But regardless who has the last word on the matter for the day, what is wrong or not right with Busby is clear every time they pass through with eyes wide open.

There are no people in Busby…

This blog is all about roaming the Bicol Region, Philippines wisely on a budget. We'll talk about what Bicol has to offer when it comes to great hotel deals, good food and where to go on your vacation. So, I hope this blog site will be helpful to those of you on the look out for great deals while you have fun in Bicol. Also, I will be sharing what my life here is like and some of the things that I find interesting in my side of the world.