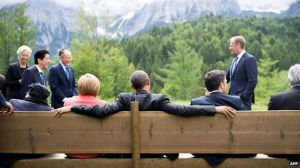 SHIMA, Japan, May 26, 2016 – Early discussions at this week’s G7 Summit took at an unexpected turn today, precipitating astonishment around the table. In his first international summit in which skis were not part of his entourage, Canada’s Prime Minister Justin Trudeau moved that Russia’s President, Vladimir Putin be reinstated to the group, thus returning it to its former identity as the Group of 8. Mr. Putin was suspended from the summit group in 2015 following Russia’s predatory acts on the global scene in 2014-15.

“It is a matter of principle,” began Mr. Trudeau, “that Mr. Putin deserves to be at this table. We, as world leaders, have simply misunderstood Russia’s recent actions in the Ukraine.” While stunned silence fell on the summit participants, Mr. Trudeau continued: “More importantly, Mr. Putin needs our love and support — inclusion, understanding, and dialogue are vital to his well-being.”

Despite the accepted G7 Summit rule that no pictures are taken outside of formal photo opportunities, photographers instantly began shooting. Mr. Trudeau’s brazen comments and his natural photogenic looks spawned commotion among the assembled press, followed by outrage from the G7 leaders. Following is a quote by quote description of the raucous verbal exchange that followed, which indeed strayed from the usual calm and cautious diplomatic language:

“Not at all, Monsieur Hollande. This is simply the sunny, Canadian way!” – Trudeau

“Mr. Trudeau, that would be unwise and let me be clear: the American people would never support that.” – US President Obama

“Mr. Obama, my father would have liked you. But I am ready to say to you now, it’s time America and the world put away their guns, and surround Mr. Putin with sunny rays of support and happy, happy thoughts.” – Trudeau

“Genug, Mr. Trudeau! Stop it right there! I have never heard such pablum in my 61 years on this good earth. It is akin to stating the Volkswagen is not at all for the volks!” – German Chancellor Angela Merkel

“Bollocks, let’s not get our knickers in a twist, everyone. Oops! Pardon my language, Chancellor Merkel. Justin’s just being cheeky or, well — Bob’s your uncle, mate — what are you really saying?” – UK Prime Minister David Cameron

“I’m saying let’s all be friends! I mean, can’t we all just get along?” – Trudeau

“Make no mistake, that’s not possible. The American people would never support that.” – Obama

“Let’s table this motion for the time being — we must let cooler heads prevail in this room, Mr. Chairman. I suggest we recess and perhaps enjoy a glass of red wine together. Perhaps we can converse on lighter matters.” – Matteo Renzi, Prime Minister of Italy

“Solid idea, Matt! Hey, perhaps we can all chat about the Sussex polo event I’m planning that I’d love for everyone here to attend. Vlad’s already RRSP’ed, and China’s Xi Jinping is trying to clear his schedule.” – Trudeau

“Here’s the deal: The American people do not support polo. Their priority is football. So if you host some four-down football, I’m in.” – Obama

With those final words of the morning, and much indecipherable mutterings as they exited the chambers, the morning proceedings recessed for a time.