Recently, the Bos Lady and I spent a week in Las Vegas, which was a nice break from River City weather. It wasn’t hot down there, just a comfortable 60F/15C high on most days. We enjoyed our stay, although it’s doubtful we’ll be back in Sin City unless it’s a 100 percent golf getaway.

One of the friendly till clerks at Walgreen’s next to our hotel asked the Bos Lady to describe Las Vegas from a visitor’s perspective in one word. The Bos Lady pondered for a second or two, then replied, “Excessive”.

Everything in Vegas is excessive, larger than life, and in your face. Some of all that is amazing, some is annoying or simply sordid.

The hotels are remarkable in their sheer size and architecture. And the money to build these – now that’s excessive! According to a March 2014 article in the Las Vegas Review-Journal, the most expensive hotels built in the city (with prices adjusted for inflation) are:

But if one can ignore the sheer excess of monies to build these hotels, it’s easy to be overwhelmed by them. Their infrastructure must be mind-bogglingly complex.

As Las Vegas is arguably the entertainment capital of the world, there is no shortage of top calibre shows and headliners. We took in ventriloquist Terry Fator’s show at the Mirage Hotel, who apparently was an America’s Got Talent winner. He has also been voted Best Show and Best All-Around Performer in a poll sponsored by the Las Vegas Review-Journal.

From what we saw, Mr. Fator has earned those commendations. The man is hilarious and his ventriloquist talents are second-to-none. He nailed singing impressions of Garth Brooks, Lady Gaga, and Adele to name just three. We were thoroughly entertained from start to finish; money well spent.

The other formal show we took in – read endured – was the Criss Angel Believe show at the Luxor. Angel spent more time boasting about and promoting himself than performing illusions, and his comedic sidekick had as much stage time as he. More disappointing is that the show is billed and advertised as an event in partnership with Cirque du Soleil. Well, there was no Cirque presence anywhere in the show. Nil. So even if one doesn’t gamble in Las Vegas, you can still lose a bundle in no time! 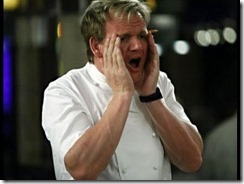 Food at restaurants on the Strip is very good and plentiful. We were fortunate to find a great buffet breakfast in our hotel, the Venetian, so we partook (and partook!) this morning smorgasbord on three occasions. All in all, the only dining “miss” was at the newly opened Gordon Ramsay Pub & Grill. Poor service and a $30-dollar US fish and chips entrée – are you kidding me? – led to a negative experience. I almost went all Gordon Ramsay on their sorry asses staff, but in the end kept a composed Canadian presence, eh?

Our trip to the Hoover Dam was a highlight; a 726-foot high engineering marvel with enough concrete to pave a 16-foot wide highway from San Francisco to New York City! The Hoover Dam is all the more stunning considering it was built without our modern era’s high-tech construction equipment. A somber note about the dam is that 96 construction workers lost their lives on the project. Our tour guide said the first person killed was a man who had a son working on the job; tragically, this man’s son was the dam construction’s final fatality.

Of course, a vacation in Las Vegas is incomplete without a visit to the Grand Canyon in the neighbouring state of Arizona. Awesome. Humbling. Incredible. As cliché as it sounds,

our first sight of the Grand Canyon took our breath away. It also gave us rubber knees: there are no fences at the canyon edges of the West Rim, so the Bos Lady and I came no closer than five feet of the precipices. We wondered how many people have died falling into the canyon (are we morbid or what!), and learned – at least according to Wikipedia – that only 53 people have met their Maker by falling into the canyon.

And before leaving Las Vegas, a quick thumbs up or down on other traits and quirks of Sin City:

Finally, the last word. I give it to French writer and philosopher Bruce Begout who described Vegas in this manner:

“As thick as the giant advertising billboards that ubiquitously package it, loading it with naive and comic symbols, crude, schematic messages, Las Vegas is a city of literal superficiality.”

Executive Director of a non-profit organization in Alberta that supports adults with developmental disabilities. Love to golf, curl, and write. Married to the Bos Lady for 34 years. We have one daughter and a son-in-law, two sons, a daughter-in-law, three granddaughters, and two grandsons. View all posts by BosMan31