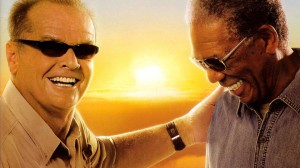 Some milestones were celebrated or noted at Chez Bos recently: the Middle Child’s 21st birthday (“I’m legal everywhere now, Papa!”); the Bos Lady’s 45th, who just gets better with age; and the 23rd anniversary of Dad’s passing. All of these combined to spark thoughts of the march of time, and health and buckets. As in bucket lists.

I wasn’t familiar with the term “bucket list” until I enjoyed Morgan Freeman and Jack Nicholson star in the 2007 Bucket List movie about “two terminally ill men (who) escape from a cancer ward and head off on a road trip with a wish list of to-dos before they die.” In other words, doing the wanna-do’s in their lives before they kicked the bucket.

Puts a whole new notion to buckets, doesn’t it? When I was a wee lad, buckets were either of two things: a bucket of KFC chicken (15 pieces, in comparison with the barrel, which had 20); or simply the fancy name for a pail. In recent years as I picked up the game of golf, the bucket became synonymous with the driving range. “Hi, I’ll have a large bucket of balls, please.”  So now the question is: should I start thinking about bucket lists?

It’s hard to believe in a few short months, the Big Five-Oh! looms for me. Still a relatively young age, you might say and I’d start to nod in agreement. But then a pause. In Bos Years, which are similar to dog years, 50 years is actually the ripe old age of 93. (Bos Lady, if you’re reading, this is a joke…ha ha!)

Yes, I jest. But although I’m not ready for filling or emptying bucket lists, I have some other activities and goals; more modest ones. They are simply to get back in shape so I can see my toes again. I know they’re down there because I recently ripped a hangnail on my pinky toe. Oh, the pain! I don’t know how pregnant women put up with not seeing their toes for almost forever but I sure can now relate to the pain of childbirth. My word, that hangnail pain is excruciating!

This week, I’ve climbed back aboard the Evilliptical after a summer of workout inactivity. After being banished to spend the past summer alongside the dust bunnies under the basement stairs, the Evilliptical has emerged from its dark purgatory with revenge on its mind. I know it because its 30 minutes workout feel like a day and its tensions feel far more resistant. It mocks me. But I will survive! (Say, doesn’t that sound to you like there might be a hit song there?)

Yes, I’ll persevere and shed the poundage collected over the summer. Now that the golf clubs are put away and dreams of buckets long put to rest, it’s time to get back in shape so I can look forward to those lofty milestones….96, 98…100?

But this winter, I’ll not seek the help of Jillian the 30-minute DVD fitness queen. Man, she’s just plain mean. The Bos Lady can deal with her. I’ll stick with the Evilliptical in spite of its mocking laughter.